From OpenZFS
Jump to: navigation, search 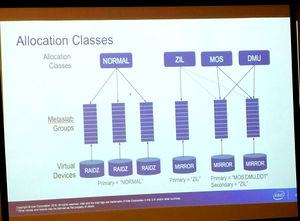 pL2ARC status: Code [out for review on illumos] for several years, waiting on TRIM to land. Suspect ZFS on Linux will merge it once they merge TRIM.

TRIM status: Likewise, code [out for review on illumos] and [OpenZFS] for a while, but not yet merged. ZFS on Linux was waiting on OpenZFS to merge it first, but now [looks like it's just going to merge it shortly].

How to help: pushing the code the last few inches across the finish lines by refreshing the patches against latest master branches and fixing any issues reviewers identify.