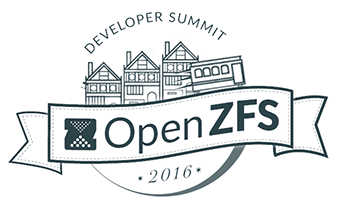 The goal of the event is to foster cross-community discussions of OpenZFS work and to make progress on some of the projects we have proposed. This 2-day event consists of a day of presentation and a 1-day hackathon.

Check out the following blog posts about the event:

Click on the title of the presentation for more details.

We had lightning (5 minute) updates on the following projects which have been discussed at previous conferences:

Congratulations to our 4 "best in show" winners, who received Intel Compute Sticks, donated by Intel.

Thanks to everyone who participated at the hackathon!

A huge thank you for all the companies sponsoring the OpenZFS Developers Summit!

As an OpenZFS Dev Summit sponsor, you are providing critical support to our annual event, without which it would not be able to continue. Your generous contributions pay for the venue, food and beverage expenses, live streaming service, and other miscellaneous goods and services.